Updating your home with Ethernet is not as hard as you may think.  Yes it’s uncomfortable at times and does involve risk, but for a few hundred or less you can do this job that would otherwise be $1,500 or more to have it professionally installed.  My installation took one evening and part of a weekend day to complete.  Now I’m not pestered for wifi fixes for my gamers in the household who have hard connections everywhere!  If you need assistance just give us a shout at help@4D5ASecurity.com.

Consider the design of your house and where it makes sense to run the lines.  Exterior walls normally have insulation which is a problem for routing wires through walls with a snaking tool (avoid exterior walls).  The same is true for any window type area where additional framing exists.  Check out a home under construction near your house to get an idea of what I’m talking about if you don’t know how framing typically works in a house. Identify your main hub area for the house – in my setup it’s an office where a cable line enters the house.  All lines to other rooms go into this central room.  Normally going up into the attic enables you to quickly drop lines into other rooms and into a central room.

In a two story house you’ll have to figure out how to get up to the next level.  Don’t put it next to any metal/duct work as that will lead to safety and interference issues unless you get a special cable.  Instead find a non-bearing interior wall or – easier – drill to the outside of the house and route the wire along the siding/wall up to the second story room(s).  In my case I was able to easily conceal the wiring under siding and use a few fastners to hold it in place, add some clear caulking, and a “J” loop so that water drips down off the line instead of into the hole made for the wire.  Existing through an attic space may also be appropriate.  Take a look for other external cabling to find routes that are best to meet your needs.

For the ‘server room’ I recommend you purchase an 8-16 port switch which can be obtained for less than $100, along with Ethernet wires to hook up to outlets.

Your home improvement or hardware store will likely have what you need for Ethernet.  You’ll need 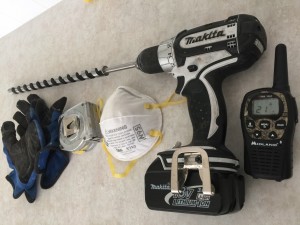 Most of your work is done in an attic.  I start by cutting an Ethernet outlet access area in the wall in the room.  I normally locate a power outlet, move in towards the center of the house at least 12″ away, looking for a stud so that I can make sure my box won’t hit a stud and will be in the chamber next to the one with power.  This way power is down one chamber while Ethernet is down another nearby.  Most framing is done 16″ on center meaning if the electrical outlet is on a stud I can locate the next stud for that chamber and then studs to the right or left – and then measure 16″ from the center of one chamber to another.  Place an Ethernet wire bundle near the opening for when a snake is dropped later. When I go up into the attic this is easier to find because I can trace wires to the wall and then measure towards where I think the Ethernet outlet is for the room.

Wear jeans and a long sleeve shirt and a mask so that you don’t get glass fibers into your skin from insulation.  I like wearing a headlamp as I carefully step on rafters.  If you step anywhere else you’ll likely fall through the ceiling so only step on wood.  If insulation is in the way move it until you can see where to step. Watch your head for nails from the roof! 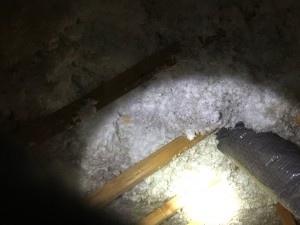 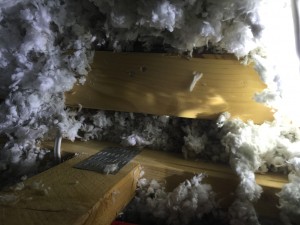 Move to the first area where a wall should be where you want to drill a hole to drop a wire down.  Have someone in the room tap on the wall until you can locate it in the attic.  Look for wires and find where the electrical outlet is. 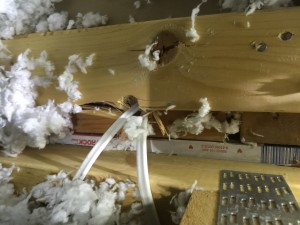 Then figure out what direction you should go – have someone tap directly above your Ethernet outlet but near the ceiling, and measure back from the electrical wire feed to make sure that’s where you should drop your line.  Then drill into the center of the framing and look for light.  Hopefully it’s empty (no insulation) making it easy for you to snake the wire down to the outlet opening and have someone tape the wire to the snake with no catches (smooth edges). 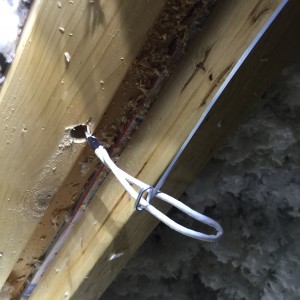 Pull up the wire and drag it to the drop location in the attack, your ‘server room’, and pull in an extra 10′ give or take, based upon how high the walls are, estimated length need, plus some, as you don’t want your wire short!  Have the person in the room cut the wire when that is done and move to the next room.  Repeat as needed until all lines are installed into separate rooms and also dropped down into the server room.

Again, if you have a need, figure out a way to get wire to another level, etc, and run the lines into the main server room as you did for attic lines.  Once all the lines are run you’re ready to start hooking them up to outlets.

Each room needs to have an RJ45 jack added to a line and then placed inside of an outlet, with face plate added.  Each jack can be a little different, but they have a color coded guide.  Start by making sure the end is trimmed neatly with insulation removed a couple of inches to make wiring easier: 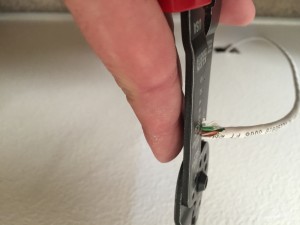 Take your wire and untwist all the pairs and straighten them with your fingers. 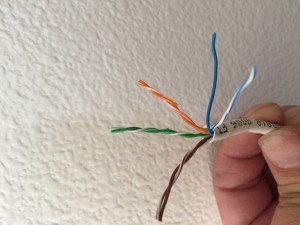 Move wires into slightly crimped positions on each portion of the jack according to its design and legend. 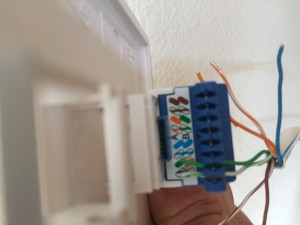 Use your crimping tool to secure each wire and trim off the extra. 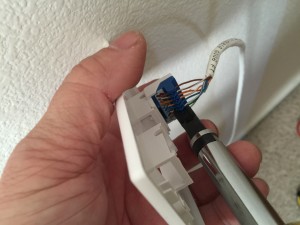 Snap the connection into an outlet and affix it to the gang box and add the face plate. 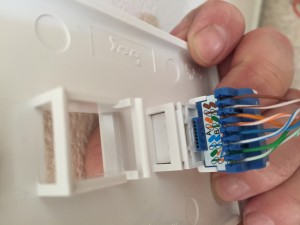 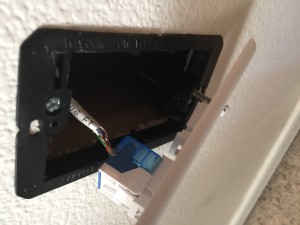 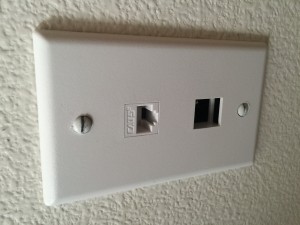 I like to also label each one of my outlets with a sharpee, such as 1, 2, 3, and then do the same in the server room on the inside of the plate.  This enables me to quickly test lines if there is a problem in networking/troubleshooting for whatever reason.

In my case I bought a 16 port switch so that I could easily drop all my lines into a single device that then routes upstream to my ISP router.  To test connectivity I first took a line from my switch to a computer to show it pick up an IP.  Then I hook up a wire from a port in the server room, port “1” on the new outlet installed, to the switch.  I then have someone hook up a computer in a room and see if it works.  If not I move the jack to position 2, 3, etc, until we get a connection.  I then label the inside of the face plate with that number and leave it connected.  I then use another wire to hook up and test additional connections until all rooms are tested and work as expected.

Proactively you can tape a plastic bag underneath an area in the wall where you are cutting with a wall saw to collect all the dust and debris.  Makes for a cleaner work environment and clean-up as you cut new outlet holes.

Secure each line in the attack with wiring clamps that you hammer down being careful to not damage any line.  Add foam to each hole and move insulation back into place in the attic.  Make sure you have J loops on any outside lines to wick away water and caulking sealant for the hole.

Make sure you are checking for electrical and plumbing lines – you don’t want to saw/drill into any such lines!  Be cautious in the attic and while climbing/exterior, etc.  There are stud finders, like the one I use, that detect both studs and electrical but if you’re looking for outlets and offsetting by 16″ you’ll normally not have any problems with electrical.  Pipes, which won’t normally show up with a scan, could be more of a problem so cut cautiously in walls.